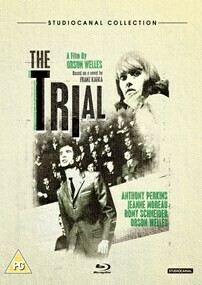 Based on the influential Franz Kafka novel, THE TRIAL is a paranoid masterpiece directed by Orson Welles (Citizen Kane, Touch of Evil). Josef K (Anthony Perkins – Psycho) is arrested, but has no idea what crime he is accused of. In order to find out what offence he is meant to have committed, and to protest his innocence, Josef K must go through the machinations of the judicial system, but he soon finds himself trapped in a dehumanised nightmare.

Welles’ claimed that THE TRIAL was the best film he ever made. Rich with Welles’ trademark style, THE TRIAL is a visual feast. The icy black and white photography strikingly depicts the spider-and-fly games of an ineffectual man struggling against his inescapable fate. Using the cracked labyrinthine corridors of Paris’ ruined Gare D’Orsay as his set, Welles perfectly captures Kafka’s terrifying skewed world. A masterclass in building tension, THE TRIAL aptly illustrates why Welles is often cited as the greatest director of all time.

Welles, Kafka and The Trial documentary

Interview with Steven Berkoff (actor, playwright) –adaptations of Kafka’s The Trial and Metamorphosis

+ Booklet on the movie written by Jonathan Rosenbaum,film critic and author of Discovering Orson Welles (2007), the editor of This is Orson Welles (1998) and consultant on the 1998 re-edit of Touch of Evil.