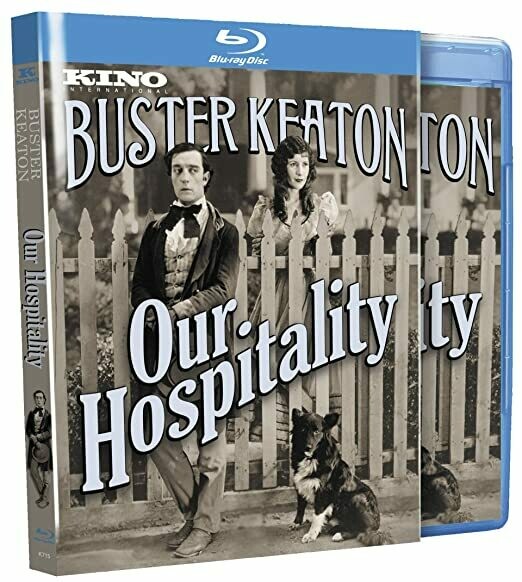 Like his 1926 film The General, this elaborate historical comedy broadened the boundaries of slapstick and proved that Keaton was not just a comedian, he was an artist. Keaton stars as youthful dreamer Willie McKay, who travels westward on a rickety locomotive to claim his birthright, only to find that his inheritance is a shack. And he learns that the object of his affection (Keaton s real-life wife, Natalie Talmadge) is the daughter of a man with whom his family has been engaged in a long, violent feud. McKay s personal struggles are punctuated by brilliant slapstick set pieces that involve an exploding dam, raging waterfalls, and a primitive steam engine. Keaton supervised the design and construction of the train, which he revived two years later for the short The Iron Mule (in which he appears without credit as an Native American chief). This definitive edition of OUR HOSPITALITY features an exquisite orchestral score by Carl Davis, performed by the Thames Silents Orchestra; a documentary on the making of the film; and a rare alternate cut entitled Hospitality . SPECIAL FEATURES: Music composed and conducted by Carl Davis, performed by The Thames Silents Orchestra (in 5.1 Surround or 2.0 Stereo), Musical score compiled by Donald Hunsberger (2.0 Stereo), The Iron Mule (1925, 19 Min.), with music by Ben ModeL, Original documentary on the making of the film, written by film historian Patricia Eliot Tobias with David B. Pearson, Hospitality, a 49-minute alternate cut of the film, with an explanatory introduction, and an organ score by Lee Erwin, 2 Galleries: Photos & Snapshots

Buster Keaton (October 4, 1895 February 1, 1966) was an American comic actor and filmmaker. He was best known for his silent films, in which his trademark was physical comedy with a consistently stoic, deadpan expression, earning him the nickname The Great Stone Face. Keaton was recognized as the seventh-greatest director of all time by Entertainment Weekly. In 1999, the American Film Institute ranked Keaton the 21st-greatest male actor of all time. Critic Roger Ebert wrote of Keaton's extraordinary period from 1920 to 1929, [when] he worked without interruption on a series of films that make him, arguably, the greatest actor-director in the history of the movies. Orson Welles stated that Keaton's The General is the greatest comedy ever made, the greatest Civil War film ever made, and perhaps the greatest film ever made. A 2002 worldwide poll by Sight & Sound ranked Keaton's The General as the 15th best film of all time. Three other Keaton films received votes in the magazine's survey: Our Hospitality, Sherlock, Jr., and The Navigator.