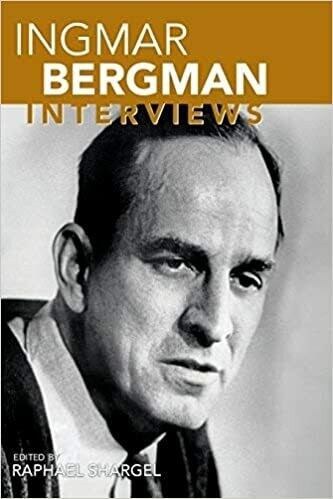 Toward the end of his 1971 conversation with Richard Meryman, easily the best interview in this collection, Bergman says that "to make a film is to try to open up the roof--so we can breathe" (p. 112). This is as good a one-line characterization of Bergman's project as I know. Bergman's films defy easy analysis, sometimes because they're poorly conceived, as Bergman himself admits (he thinks, for example, that "Through a Glass Darkly" is a prime example), sometimes because even Bergman in retrospect isn't quite sure what he was trying to do, but sometimes because there's simply a great deal of depth to them. How, for example, to collapse the message of loneliness, despair, human nature, and hope conveyed in "The Silence" into a couple of sentences? But what Bergman at his best does succeed in doing is expanding us, opening up the roofs of our worldviews, inviting us--sometimes forcing us--to breathe in an atmosphere that's crisp and thin and heady.

Readers who pick up Raphael Shargel's collection of Bergman interviews in the hope that the master will explain what his films are about will be disappointed. Bergman tells us that he wants to elicit emotional experiences first and cerebral ones second in his films; that dreams have influenced his scripts and his director's eye; that he works best when his days are rigorously scheduled; that he thinks a film is "selected reality" (p. 106), which reminds me of Tarkovksy's beautiful characterization of film-making as "sculpting time"; that he thinks a certain "childishness"--a naivete, an openness to experience--is essential for good art. But what Bergman doesn't do, appropriately enough, is tell us how to interpret his films. So in many ways, his intervews are as mysterious as his artworks.

The interviews collected by Shargel vary in quality. As I've mentioned, Richard Meryman's is the best of the lot, closely followed by A. Alvarez's. The "Playboy" interview conducted by Cynthia Grenier is worse than worthless, and seems intent on focusing on little else than sex in "The Silence" (the interview was conducted shortly after the film's American debut). There are numerous typos in the text. "Feeling" is consistently spelled "felling," for example, and at one point Bergman is referred to as the "15 year old creator of 'The Silence'"! The only other book I've read by the University of Mississippi Press was also poorly proofed. Strange that an academic press is so careless in its copyediting.

Shargel's collection is a decent starting point for readers new to Bergman, but better ones include Bergman's memoirs, The Magic Lantern (2007) and Images (1995). Jesse Kalin's The Films of Ingmar Bergman (2003) is highly recommended for serious students.