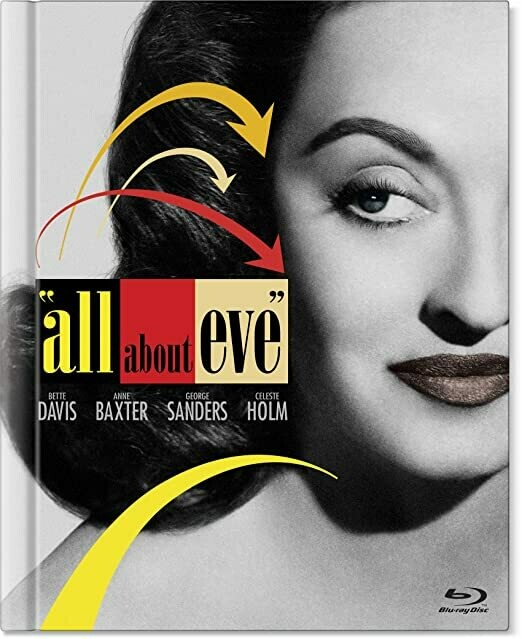 ALL ABOUT EVE - BLURAY

From the moment she glimpses her idol on Broadway, Eve Harrington (Anne Baxter) strives to upstage Margo Channing (Bette Davis). After cunningly stealing Margo’s role, Eve disrupts the lives of anyone close to the actress in this timeless cinematic masterpiece that earned a record 14 Oscar® Nominations*, winning six — including Best Picture!

Writer-director Joseph L. Mankiewicz's All About Eve ranks as one of Hollywood's wittiest--and most quotable--films about showbiz. In his dishy commentary, Mankiewicz biographer Ken Geist (Pictures Will Talk) says "it's really about Herman and Joe and their rivalry," though the story actually revolves around two women, a Broadway star and her underhanded understudy (Joseph's older brother, Herman, cowrote Citizen Kane). Supporting actress Celeste Holm and Joseph's son, Christopher, join in on the first track, while author Sam Staggs (All About "All About Eve") handles the second (and does a better job at staying on topic). Unfortunately, Holm, who has outlived the rest of the cast, has only a few comments to add. While she praises Thelma Ritter, for instance, she admits she didn't get along very well with the notoriously blunt Bette Davis. Geist and Mankiewicz return for the featurettes Directed by Joseph L. Mankiewicz and A Personal Journey, which focus on the filmmaker's background, affection for the theater, and abiding interest in class and ambition. Joseph's son, Tom, and his widow, Rosemary, also contribute their thoughts. Other extras examine the real Eve Harrington (an actress named Martina Lawrence) and 18th-century tragedienne Sarah Siddons (who inspired the film's awards banquet), while the promotional spots and the All About Eve episode of AMC Backstory feature archival interviews with Anne Baxter and Davis, who credits Mankiewicz for "resurrecting my career." The glossy digibook case, which encloses the pristine Blu-ray, offers profiles of the principals, including Oscar winner George Sanders. --Kathleen C. Fennessy